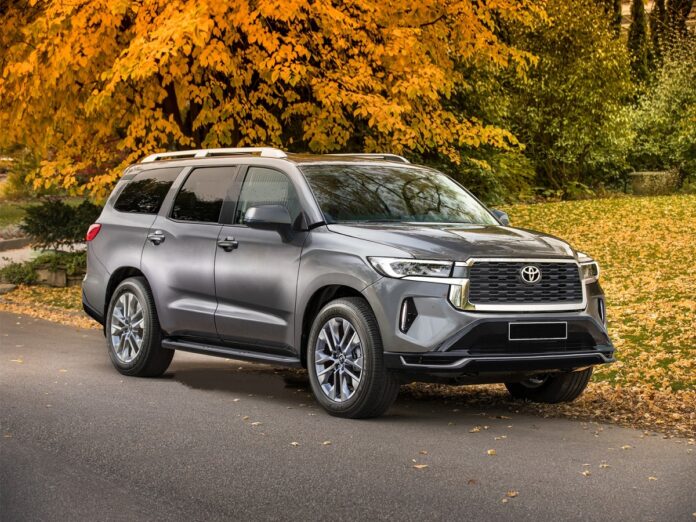 One of the longest-lived SUVs in the U.S, Toyota Sequoia, is ready for another facelift. The new model 2022 Toyota Sequoia has been confirmed, and some of the renderings are available.

If you dint know, the first Sequoia came out in 2000 as 2001MY, and the current and second-generation are being launched in 2007. Ten years after, the manufacturer facelifted this SUV and made it one of the best in class. However, the latest Sequoia is featuring fresh and more attractive styling, with plenty of novelties. Besides exterior upgrades, expect a more comfy cabin with more techs.

First thing first, the 2022 Toyota Sequoia looks fresh and bolder. Generally, some small styling changes are visible, reflecting the old structure. The new Toyota Sequoia will continue to use the rigid body-on-frame architecture and the same proportions.

The current generation is over 12 years old, and the manufacturer finally makeover it. The styling changes are there, and Sequoia comes with a revised front fascia, featuring a better grille with more chrome, and new headlights/taillights have been installed. Also, the side profile reveals sharper lines, and bumpers have more character.

The Interior of the 2022 Toyota Sequoia is the most mysterious part. From what we heard, the new model will continue with the same five trim levels, including SR5, TRD Sport, Limited, TRD Pro, and Platinum. Generally, in this department, you don’t need to worry because the cabin is the highlight of this SUV. The Toyota Sequoia SUV is a true 3rd-row seater offering enough room for seven passengers.

On top of that, the least expensive trim includes a very long list of amenities. This trim has a 6.1-inch touch-screen unit, 8-way driver’s and 4-way front-passenger’s seats, tri-zone climate control, and a great moonroof. Apple CarPlay, Android Auto, and Amazon Alexa compatibility are also standard. However, the next generation Sequia might get the same infotainment system as the Tundra pickup and more standard techs.

Safety features on the Sequoia are one of the best. This model comes with blind-spot monitoring, forward-collision warning with pedestrian detection, automatic emergency braking, lane-departure warning, and adaptive cruise control.

The upcoming 2022 Toyota Sequoia is a massive SUV that needs a potent engine. From some early reports, the next generation Sequoia will probably use the same engine as the predecessor. This model uses a Lexus-derived 5.7-liter V8 as the only option. Thanks to that engine, this SUV can deliver 381-horsepower V8 and 401 lb-ft of torque.

However, some changes in this department might happen, and according to the latest news, the aging 6-speed automatic transmission might be replaced with the new one. The TRD Pro model is also available, and it comes standard with 4WD, while all other trims are powered by their rear wheels, offering 4WD as an option.

As for the towing, the Sequoia, thanks to the potent V8 engine, can tow up to 7,400 pounds. Generally, this is excellent, but nowhere near the Ford Expedition’s 9,300-pound figure.

Japanese manufacturer confirmed that the 2022 Toyota Sequoia is expected to arrive at the end of 2021 year. Some renderings are available, and the next generation featuring more attractive styling.

As for the pricing, we don’t expect any increase. The current base model costs $51,300, while the TRD Pro comes standard with 4WD starts at $65,425. The nearest competitors in the same segment are Nissan Armada, Chevrolet Tahoe, and GMC Yukon.