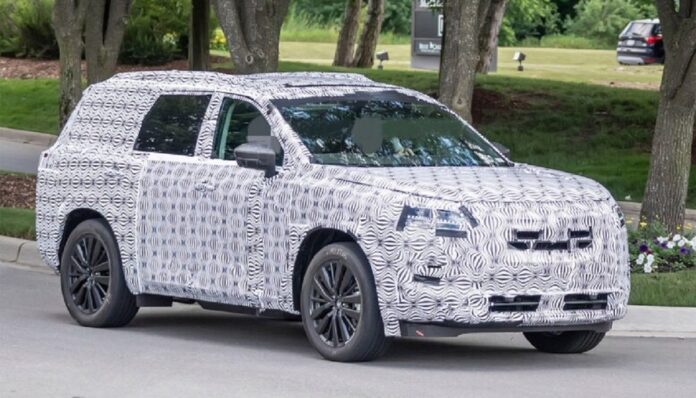 The spy photos of the 2022 Nissan Pathfinder are available, and we can see some welcoming updates. The famous Japanese manufacturer stated that it is in the process of updating and redesigning almost every vehicle in its lineup. Obviously, the first model that will get some changes is the Pathfinder model.

At first look on spy photos, the forthcoming Pathfinder has similar proportions as the current model. Besides, it keeps the same rugged, and boxy look with some new softer lines. Under the hood, the current Pathfinder uses a potent 3.5-liter V-6 power, and the redesigned one should carry over. Moreover, expect 4-cylinder and a hybrid powertrain at some point as well.

What We Can Expect From 2022 Nissan Pathfinder?

We know the new 2022 Nissan Pathfinder will stick with car-like unibody construction. However, it is not yet clear what platform Nissan will use. From some speculations, the Renault Nissan Mitsubishi Alliance might use the proven CMF-D platform. As you probably know, on this platform sits many mid-size cars and crossover SUVs. Interestly, the new spied photos reveal identical proportions and shape as the predecessor. Generally, the boxy look remains, and the manufacturer added some soft lines.

The front fascia still dominates with slimmer LED headlights and grille similar to that we saw on the Nissan Rogue model. Moreover, on the back, Nissan Pathfinder features a new LED taillight and a more prominent spoiler, giving this SUV a sportier stance.

The photographer also captures the interior of the latest 2022 Nissan Pathfinder. From what we can see, the new SUV should use plenty of cues from the recently introduced Rogue model. The spy image reveals the same digital instrument cluster and a large center infotainment screen with a hexagonal shape. Three rows of seats are pretty than enough for a family. Pathfinder is a large SUV that has enough room for seven passengers with splendid cargo behind of 79.5 cu. ft.

In terms of techs, Pathfinder is the model that always gets some of the new features. Considering that, the standard package will bring more equipment. This package includes a new 12.3-inch infotainment system, tri-zone climate control system, heated and cooled front seats, hands-free access, Bose® Premium Audio System, and much more.

In the powertrain department, the forthcoming 2022 Nissan Pathfinder will most likely use the same engine as the predecessor. That means 3.5-liter V-6 should remain under the hood. The current model with the same engine produces 284 horsepower and 259 pound-feet of torque. However, we think that some mechanical improvements may happen, providing more output.

Besides this engine, the manufacturer stated that 4-cylinder and a hybrid powertrain should be offered at some point as well. Like before, buyers can expect the same continuously variable unit.

The latest 2022 Nissan Pathfinder was spied recently, and it will introduce some improvements. Nissan, as the famous automaker, will make the upcoming Pathfinder model more competitive.

As mentioned above, there are multiple updates and improvements. The new Pathfinder will most likely debut in the first half of 2021, and at that time we can expect a pricing reveal.