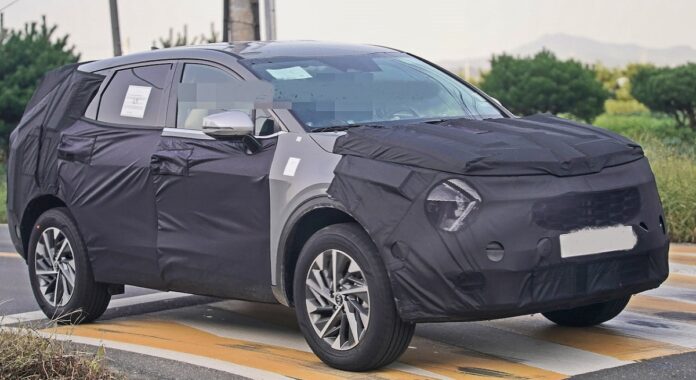 The test mule of the upcoming 2022 Kia Sportage has been just caught testing. Interestingly, the new spy photos reveal plenty of improvements over the current model. First of all, Kia will introduce more attractive styling, and we can also expect more standard features.

Generally, a spied prototype is wearing a full camo, which doesn’t allow us to see all the changes. However, we managed to see the revised front fascia that hosts vertically positioned headlamp, and boomerang-shaped LED daytime running lights. Probably the most exciting news is that Kia Sportage will use the underpinnings of the Hyundai Tucson model.

The recently spied 2022 Kia Sportage features more attractive styling compared to the previous generation. It comes with a polarizing front end, including more sleek vertical headlamps and boomerang-shaped LED daytime running light. New on the 2022 Kia Sportage would be the brand’s more elegant logo that we saw recently in promotion video.

The sides will benefit from sportier wheels that will range from 18 inches to 20. However, the rear-end would be more or less the same. Because the prototype is wholly wrapped, we can only see the LED rear combination lamps, which will be connected via a full-width light strip. Overall, the newest Kia Sportage design will be much better, and we cannot wait to see all the novelties.

The 2022 Kia Sportage comes with a remarkable interior. It features more premium materials and soft touches, which is for praise. Unlike its outgoing model, the new one comes with a dual-screen cockpit, three-zone climate control, sleeker dashboard design, a more stylish center console with minimal physical buttons, etc. According to the manufacturer, we can also expect lots of comfort, which indicates more better seats.

There is no exact information regarding the engine of the new 2022 Kia Sportage. However, many belives that Sportage will use some electrifications because of Tucson underpinnings. If the 2022 Hyundai Tucson’s powertrain line-up is to go by, there might be three electrified powertrains for Kia customers. That means Sportage could deploy mild-hybrid, full-hybrid, and plug-in hybrid variants. Interestingly, the recent report claimed that Kia might also introduce a pure electric version of the Sportage.

The more attractive 2022 Kia Sportage model could hit U.S. showrooms later this year. From the latest information, the new SUV will gain a fresh look and more standard equipment. On top of that, Kia Sportage should sit on the same platform as the latest Tucson, and it might also borrow some of its hybrid engines.

Prices of the next-gen Kia Sportage are not yet unveiled, but from some rumors, base model may start at around $25,000 or even higher. Generally, Kia offers significantly more features for invested money than its competitors, such as the Chevy Equinox and the Toyota RAV4.