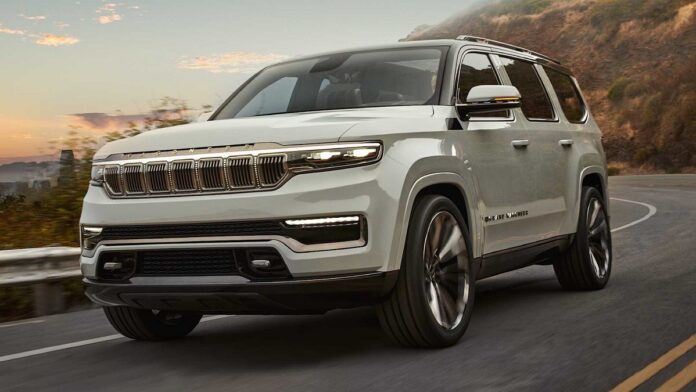 The all-new 2022 Jeep Grand Wagoneer is coming. If you didn’t know, this legendary model is the first American full-size luxury SUV that dates back to 1984. However, the new model returns with better and aggressive styling, featuring a very modern cabin. On top of that, it offers vast numbers of standard features and the best driver-assist aid from Jeep.

While Jeep hasn’t revealed anything regarding powertrain specs, we suspect FCA’s 5.7-liter Hemi V8 will power the upcoming Grand Wagoneer. As in Ram’s case, this unit will probably come with an optional eTorque mild hybrid version to boost mileage. Interestingly, Jeep has also announced a plug-in hybrid version, which will consist of a Pentastar 3.6-liter V6 powertrain with a electric motors on the front and rear, along with lithium-ion battery pack.

The most recognizable feature of the 2022 Jeep Grand Wagoneer is its 7-slot grille flanked by thin LED headlights. This traditional grille also comes with LED detailing between the slots giving a more distinctive look. Generally, the shape of the Grand Wagoneer is more slab-sided and blocky than on the regular version. Unlike the base Wagoneer, the new Grand concept is presented with massive 24-inch wheels. Overall, the design is unique, handsome but doesn’t break any new ground in full-size SUV styling.

Stitched leather seats, aluminum, wood, and onyx glass accents are the primary weapons inside the new 2022 Jeep Grand Wagoneer. Generally, this SUV cabin is highly crafted, offering seating for up to seven passengers on three rows. Comfort is the best, and the technology inside is also at the forefront. The highlight is definitively the new 12.3-inch digital instrument display and 12.1-inch horizontal infotainment display in the center.

Also, on the back, the manufacturer added two 10.1-inch entertainment screens attached to the rear and one center 10.25-inch screen. On top of that, many optional goodies can be found on upper trims. For example, one can get a large single panel glass roof and the 23-speaker McIntosh audio system.

The upcoming 2022 Jeep Grand Wagoneer is reportedly powered by a few engine options. While Jeep hasn’t revealed any technical specs, we heard that it might use an existing FCA’s 5.7-liter Hemi V8. The same powertrain powers Ram pickup truck, and we should expect an optional eTorque mild hybrid version to boost mileage.

Jeep also recently revealed that a plug-in hybrid version would be available as well. This model will most likely consist of a Pentastar 3.6-liter V6 engine with a motor’s on front and rear, and it will use a lithium-ion battery pack.

The 2022 Jeep Grand Wagoneer is an excellent SUV that offers very modern styling and plenty of goodies inside. According to many reports, this model will cost around $55,000.

However, fully loaded models may run upwards from $60,000 to $70,000. In the same segment, Jeep Grand Wagoneer will compete with the Lincoln Navigator and Cadillac Escalade. Jeep’s newest flagship model will go on sale later in 2021.