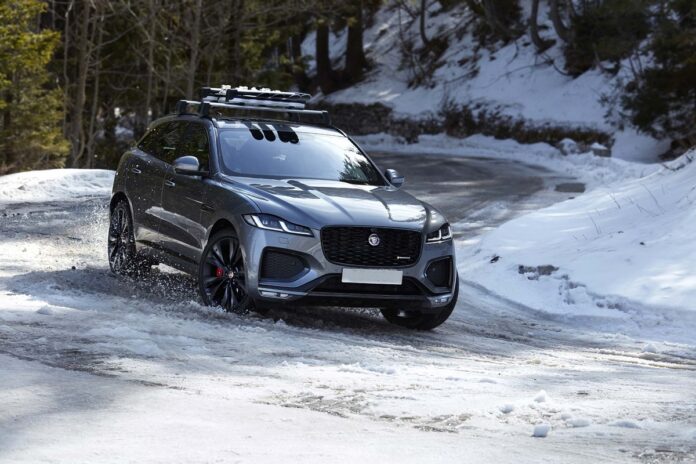 Among the many compact luxury SUVs, the 2022 Jaguar F-Pace is positioned very high. The redesigned version is official, and it will arrive with more modern styling, featuring a comfortable cabin with lots of new technology. Generally, for 2022, Jaguar will introduce a few visual tweaks, including a revised grille, reworked hood, and updated lighting with better graphics.

Perhaps the most exciting news is that the new turbocharged-and-supercharged 3.0-liter inline-six are available with a 48-volt starter-generator hybrid system. Alongside, the manufacturer also offers a standard turbocharged 2.0-liter four-cylinder that makes 246 horsepower.

For 2022, Jaguar brings the F-Pace’s exterior up to date. Generally, the new SUV features the same design language as its predecessor. However, some refreshments are visible on the grille, LED daytime running lights’ blades, and the side intakes’ silver strakes.

The rear-end also gets new taillights that look similar to those found on the I-Pace model. We also noticed that a rear bumper looks more elegant thanks to a small nip and tuck. The new F-Paces sits on the same platform as its predecessor but now is much lighter. Dimensionally, this SUV remains the same with the length of 186.26, the width of 72.66 inches, and a wheelbase of 113.15 inches.

As we have seen on many premium SUVs, the new 2022 Jaguar F-Pace features a very modern and spacious cabin. It comes with two rows of seats, providing decent room for five passengers. There’s 33.5 cubic feet of cargo space behind the rear seat, and 63.5 cubic feet when seat are flat. In terms of technology, the Jaguar F-Pace next-generation features a 11.4-inch touchscreen infotainment screen with a new Pivi Pro system.

It supports the pairing of two smartphones, and Apple CarPlay and Android Auto are standard. Generally, you can get optionally a 12.3-inch digital instrument panel, looking much like Audi’s so-called Virtual Cockpit. Other amenities include heated seats, keyless entry, and a 14-speaker Meridian sound system that’s standard on every F-Pace model.

The new 2022 Jaguar F-Pace is one of the rare SUVs that offer few engine options. The base model features a turbocharged 2.0-liter four-cylinder engine that makes 246 horsepower.

Besides, the Jaguar F-Pace is also available with a much more powerful turbocharged-and-supercharged 3.0-liter inline-six powertrains that make either 335 or 395-hp. Both versions utilize a 48-volt starter-generator hybrid system. At this point, the EPA hasn’t released the fuel economy of the F-Pace’s new inline-six engine yet, but we expect some improvement over the outgoing model.

The release date of the 2022 Jaguar F-Pace will happen sometime next year. From the information that we got, Jaguar will probably introduce the new version later this year. As we mentioned, the next generation of Jaguar F-Pace will receive some visual tweaks that will make it more adorable.

On top of that, plenty of new technology will be available and more standard features troughs trims. Pricing is not yet available, but it will most likely cost a couple of thousands dollars more than before. The current base model starts at a little less than $52,000. The F-Pace main competitors are Acura RDX and Lincoln Corsair.

2023 Jaguar I-Pace Is Ready for Another Mid-Cycle Redesign