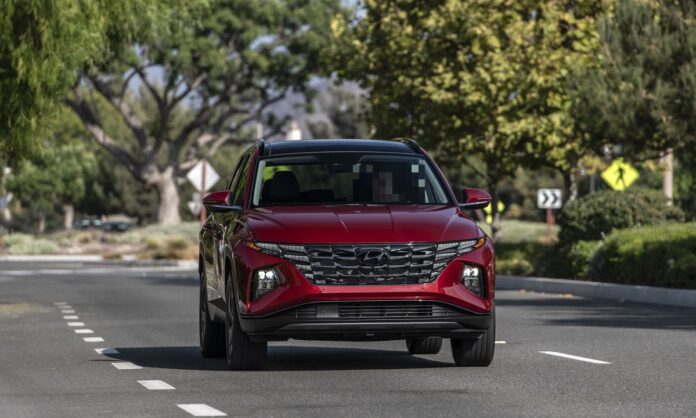 Finally, the all-new 2022 Hyundai Tucson will be on sale next month. The Hyundai Tucson gets a full makeover for 2022, featuring a completely new polarizing exterior styling. This SUV is entering its fourth generation, and with its odd design, it will definitively stand out from the rest of the SUVs in the same class.

Besides this model, the manufacturer will also release the N-Line version that looks more aggressive and sporty. Fundamentally, thanks to a more aggressive grille and slightly redesigned front bumper with a larger lower central air intake, this version has plenty of elements to set itself apart from the base model.

The new 2022 Hyundai Tucson looks completely different than the outgoing model. It employs angular lines, with short overhangs and a long wheelbase, resulting in a more sporty stance. Unlike before, the front fascia dominates with a textured jeweled grille and matching LED headlights.

The base Tucson rides on stylish 17-inch alloy wheels, while much bigger 19-inch alloys are available on the mid-range SEL and higher trims. On the back, the new SUV features angled, narrow taillights that we saw recently on the Elantra model. However, N-Line will be available as well, with a longer wheelbase in the U.S. This model featuring a special grille and 19-inch wheels.

The refreshed 2022 Hyundai Tucson sports a modern cabin that is filled with lots of technology. However, unlike the Hyundai’s flagship SUV Palisade, the new Tucson features an entirely different dashboard design. It comes with a digital gauge display, a push-button shifter, and a touch-sensitive control panel for the climate-control system and infotainment.

Comfort is guaranteed, and Tucson’s rear-seat space and cargo area are both more extensive than the outgoing model. The new version also offers a standard 8.8-inch touchscreen that’s integrated into the dashboard with Apple CarPlay and Android Auto on the technology side. However, a larger 10.3-inch screen with built-in navigation is optional. Also, features like SiriusXM satellite radio, Bose stereo system, and a Wi-Fi hotspot are all optional.

Under the bonnet, the 2022 Hyundai Tucson is available with a few engine options. There are precisely three of them. The base model uses a 2.5-liter inline-4 generating 187 horsepower and 182 lb-ft of torque. However, the next two engines are hybrid and the plug-in based on the same 1.6-liter turbocharged 4-cylinder machine. The automaker says that Hybrid will be able to travel from on a single tank of gasoline about 485 miles in total.

This version delivers 227 horsepower total and 258 lb-ft of torque. The PHEV model comes with a 90-horsepower electric motor and a larger 13.8-kWh lithium battery that takes about two hours to charge fully. The total system output is 261 horsepower. According to Hyundai, the PHEV model’s all-electric driving range is 28 miles, along with an estimated EPA fuel economy of over 70 MPGe.

How Much Will the 2022 Hyundai Tucson Cost?

When it hits the market, the new 2022 Hyundai Tucson will go head-to-head with several strong rivals in the segment. Models such as Honda CR-V, Mazda CX-5, Toyota RAV4, and the Volkswagen Tiguan are the main rivals. We expect this model to roll onto dealer lots in March, according to many reports.

As for the price, the all-new Hyundai Tucson should start at $25,000. However, as for the N-Line model, it will be on sale later. This version’s pricing could be somewhere in the middle of the Tucson range, around $31,000.