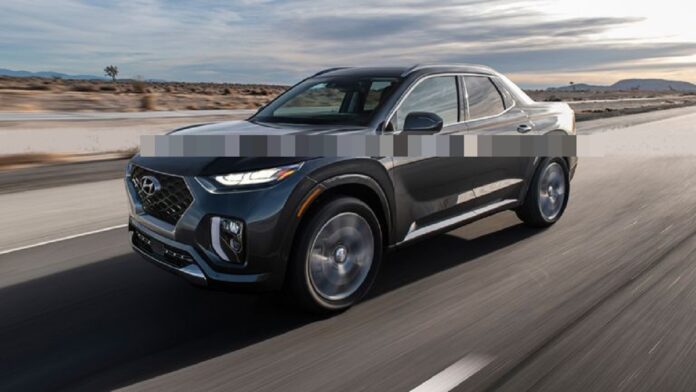 South Korean automaker is working on an all-new pickup truck, 2022 Hyundai Santa Cruz. Hyundai confirmed that it would offer the pickup truck starting in 2021. The new model will be built at Hyundai’s plant in Alabama, alongside Elantra, Sonata, and Santa Fe models.

Some of the early reports revealed that Santa Cruz will most likely share underpinnings with the latest 2022 Hyundai Tucson and Santa Fe models. That means the next generation will get car-like unibody construction instead of using a truck-like body-on-frame structure. If you can remember, Honda does the same with its Ridgeline pickup, which uses the same platform as the Pilot crossover SUV.

Some photos of the new Hyundai Santa Cruz are available, and we must say, this model features plenty of cues from the Santa Fe SUV. From all angles, the Santa Cruz looks great, and Hyundai’s new cascading grille dominates the front with a thin-slit high-mounted LED daytime running lights.

From the side, Hyundai features a muscular look thanks to 19-inch aluminum-alloy wheels. On the back, the new taillights are present as the body-colored bumper, giving this model a more sporty stance.

Hyundai is a carmaker that delivers always high-quality cabins. Generally, all models feature plenty of upscale materials, and the 2022 Hyundai Santa Cruz will not be an exception. According to some early reports, the forthcoming pickup truck might adopt the same cabin as the latest Tucson SUV.

Likewise, the Santa Cruz might come standard with a 7-inch infotainment touchscreen while going up to higher trims, buyers could get the opportunity to try bigger an 8-inch unit. We can also expect features like Apple CarPlay, Android Auto, blind-spot monitoring, an 8-way power-adjustable driver’s seat, heated front seats, satellite radio, and keyless entry/ignition to be part of standard equipment.

In terms of performance, the new Hyundai Santa Cruz might use the same engine as the Santa Fe model. Since we expect Hyundai pickup to share a platform with the mid-size Santa Fe, expect the same 2.4-liter four-cylinder 185-hp and the turbocharged 2.0-liter four producing 235-hp. However, we should see Santa Cruz will more power and torque to compete with other mid-size pickup rivals. We expect a front-wheel-drive standard, with an optional all-wheel-drive system.

Many rumors also indicate that the next-gen Santa Cruz might get a hybrid or plug-in hybrid powertrain, such as those found in the 2022 Tucson.

Finally, Hyundai confirmed the arrival of the long-awaited Santa Cruz pickup. The new model will be built in Hyundai’s plant in Alabama, and it would probably debut next year. From some early information, the new pickup might cost around $25,000 for the base model. However, the upper trims might pass the price of $50,000.

2024 Chevy Silverado HD Gets New Interior and Much More