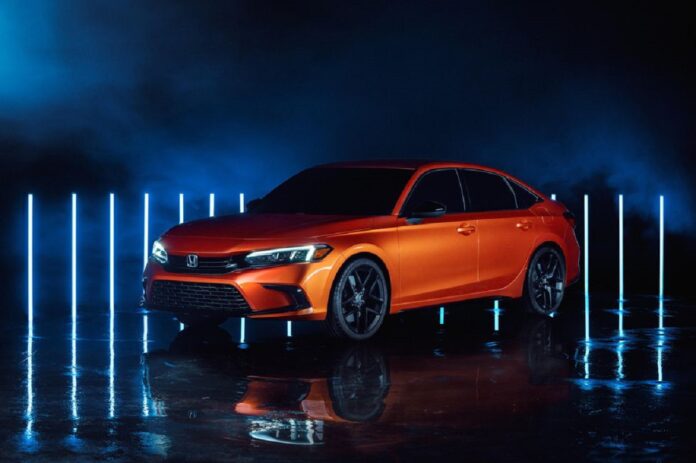 The 11th-generation 2022 Honda Civic prototype was revealed a few hours ago, and it will arrive late next spring. Like before, this popular model will be available in the form of hatchback, sedan, Si, and Type R versions. The new prototype doesn’t grow larger but will offer better performance, efficiency, and safety.

Besides, Honda also reveals that the next-generation Civic will include more standard features like a larger 9.0-inch touchscreen, Apple CarPlay and Android Auto capability, digital gauge cluster, and a lot of airbags.

The upcoming 2022 Honda Civic will sit on the same platform as its predecessor from the latest information. However, as we can see at first look, the prototype offers an almost identical look to the Honda Accord. It comes with a brand-new front end, and it features a more pronounced grille. Also, unlike the predecessor, we noticed sharper headlights with LED daytime running accents.

Overall, thanks to these changes, the Civic gains a meaner look. The rest of the body includes larger split taillights within a smoked housing, 19-inch black wheels, and dual exhaust tips. Moreover, the showed Civic also comes with a new “trailing-edge” spoiler providing better aerodynamics and a sportier look.

The 2022 Honda Civic Type R model will be also available, and it will keep its hatchback form. This version will also feature some improvements like a huge wing hanging off the back, serious wheels, tires, as additional vents and scoops.

Inside, the forthcoming 2022 Honda Civic is nearly the same size as the predecessor. That means we can expect the same comfort despite small styling differences. As mentioned, Honda will boost the next-generation Civic with more standard features and better safety.

This model comes with a large 9.0-inch touchscreen, Apple CarPlay and Android Auto capability, and a new Deco-like honeycomb mesh. On top of that, it will be the first Civic model that gets an all-digital dash. Honda also promises a raft of technology and a better HondaSense suite of active and passive driver aids.

On top of all above, the 2022 Honda Civic will be more powerful and more efficient. In addition, we can expect an upgraded version of the current powertrain. That means a 1.5-liter turbocharged four-cylinder will remain with some mechanical changes providing more output and better efficiency. The Si version will be most likely to get a high-output version of the same turbo engine. Similarly, we can expect the same with a Type R.

This model features a 2.0-liter turbo like the current car. However, at this moment, we don’t know for sure if continuously variable automatic transmission (CVT) will be standard or the six-speed manual transmission.

Honda reveals that the new version 2022 Honda Civic will start production early next year ahead of its late spring on-sale date. As for the pricing, it wouldn’t change much. The current base model starts at $22,005 and can pass $50,000 for the higher trims.