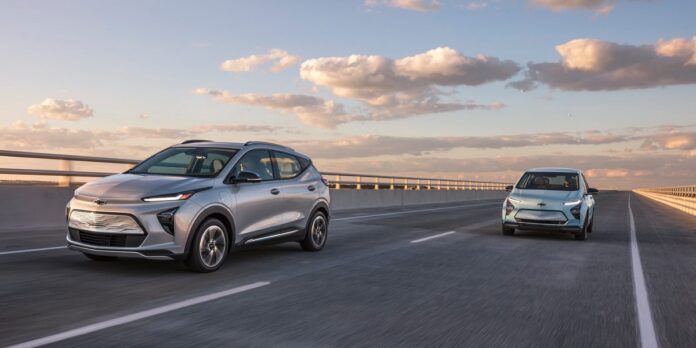 The all-new 2022 Chevrolet Bolt EUV has been finally introduced, and we must admit, it looks very futuristic. Unlike the regular Bolt hatchback, the SUV version takes it a step further, providing more attractive styling. Moreover, the standard Bolt model, which is also refreshed, shares many styling cues with its big brother. Generally, both models are riding on the same Bolt’s BEV2 platform, and both use an electric motor powering the front wheels.

The latest GM statement reveals that Bolt EUV can range around 250 miles on a single charge, which is nine miles shorter than the smaller hatchback version. Online orders are being taken now, and we should expect its arriving in summer.

The design of the 2022 Chevrolet Bolt EUV is innovative, and it borrows many cues from the larger Blazer and Trailblazer models. Generally, the all-new SUV looks sleek, offering bold styling. Moreover, because this model is an all-electric version, the manufacturer used closed front fascia.

The 2022 Chevrolet Bolt EUV’s interior is very modern. This model offers a comfortable cabin that has room for five passengers. Generally, stepping in, you’ll first notice a new 8.0-inch gauge cluster and a central infotainment system of the 10.2-inch touchscreen. As standard equipment, Chevy added wireless Android Auto and Apple CarPlay connectivity as an inductive-charging pad.

As we mentioned, the new 2022 Chevrolet Bolt EUV shares its platform with the Bolt hatchback model, using the same system. This model features a 65-kWh lithium-ion battery pack and a 200-horsepower electric motor.

However, because it’s heavier by about 90 pounds than the standard hatchback version, its range has dropped by nine miles to 250. Moreover, like the hatchback model, the new Bolt EUV sends power to the FWD system.

How Much Does the New 2022 Chevrolet Bolt EUV Cost?

The manufacturer recently reveals that the 2022 Chevy Bolt EUV should go on sale this summer. The base model, the Bolt EUV LT, will start at $33,000, while the better-equipped Premiere model costs $37,500.

Chevy also offers a special Launch Edition that comes with Super Cruise, a panoramic sunroof, unique wheels, and an illuminated charge port. This version is the most expensive, starting at $42,500.