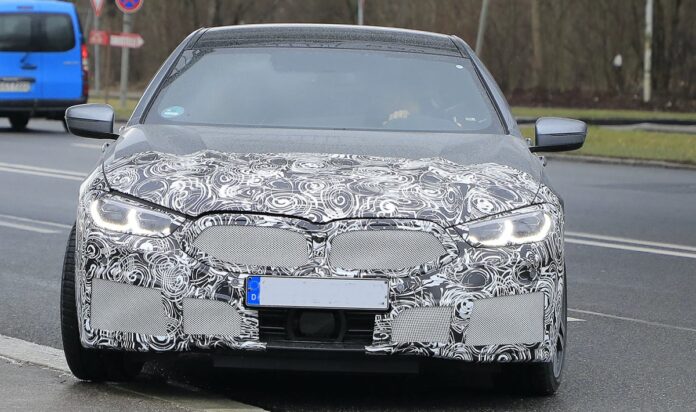 The facelifted 2022 BMW 8-Series has been spotted testing camouflaged. Reportedly, the new flagship model will go on sale in early 2022, featuring more attractive styling than before. If you didn’t know, the 8-Series is on sale for a few years now, so BMW’s getting ready to make this model more competitive.

From the information that we got, the new BMW 8-Series will look more aggressive, and it should gain some extra tech. However, under the bonnet, the latest sedan will deploy the same engines as the outgoing one. The current model offers three engine options, including 3.0-liter turbocharged inline-6 and 4.4-liter twin-turbocharged V8 with two different outputs.

The spy shots of the 2022 BMW 8-Series don’t reveal much. The sedan’s whole body is fairly disguised, but as we can see, it should only receive a mid-cycle refresh. The changes will focus mostly on the front fascia, including some tweaks on the headlights, bumpers, bonnet, and air intakes. Even the front grille seems to be mostly the same as on the current car. Basically, don’t expect a huge coffin-shaped intake that we saw recently on the BMW 4 Series and 4 Series Gran Coupe.

Like the current 8 Series, the new one will also be available in various body styles. The spied car is a four-door Gran Coupe version, and from the BMW statement, we can also expect two-door coupe and soft-top convertible versions.

There’s a huge chance that the next 8 Series could come with BMW’s latest iDrive 8 system that is presented for the first time with the iX SUV model. The system is one of the best, and it also features a smarter voice-activated personal assistant. It’ll also get a large 10.25-inch infotainment display that sits above the center console and a fully digital 12.3-inch instrument cluster.

The latest 2022 BMW 8-Series will deploy the same three engines as its predecessor. The first engine is available on the model 840i consisting of a 3.0-liter turbocharged inline-6 that makes 335 horses and 368 lb-ft of torque. However, the next engine that powers M850i xDrive has a 4.4-liter twin-turbo V8 making an amazing output of 523 horsepower and 553 lb-ft of torque.

The most powerful version is the M8. This model comes with a 4.4-liter twin-turbocharged V8 that can deliver 600 horsepower and 553 lb-ft of torque. Moreover, choosing the Competition package, the output will jump to 617 horses. Every engine sends power from an 8-speed automatic transmission to a rear-wheel-drive (RWD) or an xDrive.

On the other hand, the most expensive model is an ultra-powerful M8 Gran Coupe that costs $131k. According to BMW, all models should be on sale in early 2022. The price of the entry-level model is significantly higher than the Audi S5 and RS5, as well as the Mercedes-Benz E-Class Coupe.