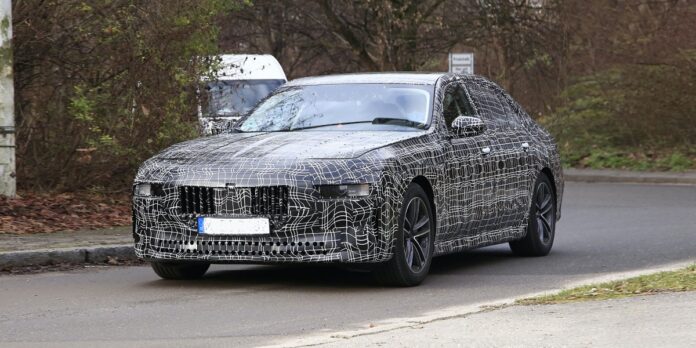 The next generation 2022 BMW 7 Series prototype has been spotted before its initial launch this year. Unlike its predecessor, the new 7 Series will introduce more changes and updates that will make this car more competitive.

Generally, this car is the flagship, and BMWs most selling vehicle that features many new high-tech. Basically, it’s even more tech-rich than the Audi A8, Lexus LS, and the recently launched Mercedes S-Class. For 2022, the BMW 7 Series will continue to share similar design cues with the car it’ll replace. However, changes are evident on the new model, and expect a massive front grille, slender rear lights, and a best-in-class cabin.

The latest spy shots of the 2022 BMW 7 Series reveals that the new sedan will share similar design cues with its predecessor. Generally, the most noticeable change is the massive front grille, slender rear lights, and a strong crease that runs along almost the car’s entire length.

Unlike its predecessor that features a set of slender headlights with distinctive L-shaped daytime running lights, the new BMW 7 Series car’s light clusters are mounted lower with a more blocky design. Overall, the design is attractive, and the new model looks more sporty.

The cabin of the new 2022 BMW 7 Series will be luxurious and spacious. This full-size sedan generally offers one of the most classy cabins in the segment. It features a generous trunk space of 18.2 cu ft. (14.8 in the plug-in hybrid), and it can be double by folding rear seats down.

Like before, the BMW 7 Series cabin is literary full of technology. Stepping in, you’ll first notice the driver information display that measures 12.3 inches diagonally and is fully digital. Also, a 10.25-inch screen on top of the dash looks unique, featuring plenty of customizations. Rear passengers may also enjoy thanks to the optional dual 10-inch HD screens and a Blu-ray player.

BMW has recently stated that the new 7 Series will come with a variety of petrol and diesel engines paired with a mild-hybrid system. On top of that, the manufacturer should also introduce a one plug-in hybrid model and a i7 fully electric version.

From the information that we got, the BMW 7 Series range of engines will include a 3.0-liter turbo-diesel engine, 3.0-liter turbocharged petrol, a 4.4-liter twin-turbo V8 petrol under the M model, and a petrol-electric plug-in hybrid with more than 40 miles of electric-only range. The less powerful engines will be rear-wheel drive as standard, while the more powerful models will probably use a four-wheel drive. All models will use the proven eight-speed automatic gearbox as standard.

The new 2022 BMW 7 Series will arrive in showrooms later this year. According to the latest spy shots, we can expect some of the significant changes. Generally, because of that, prices are set to rise a fair bit compared to the predecessor. The current model starts at $86,450 for the 740i and can go up to $95,550 for the plug-in hybrid 745e xDrive model.