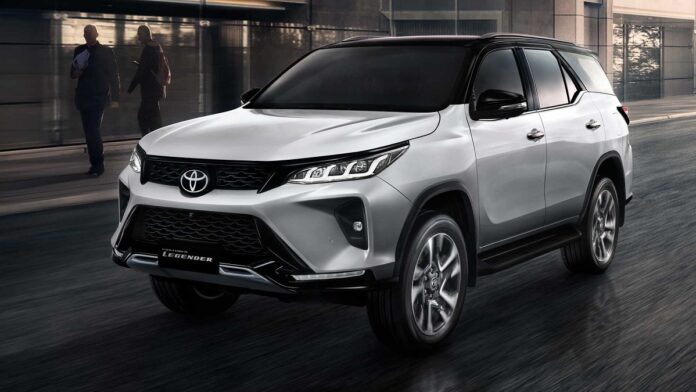 The new 2021 Toyota Fortuner was revealed recently with more power and technology. This SUV is top-rated in Australia and Thailand. Generally, it has been for the first time introduced in late 2004 as the midsize SUV. The second generation arrived in 2015, and it brings plenty of improvements. However, the third generation brings even more.

According to Toyota, the new SUV is using the same underpinnings as the popular pickup truck Hilux. Thanks to that, Fortuner looks stronger and is very reliable. Toyota also decided to roll out this SUV with a reworked 2.8-liter turbo diesel engine delivering more outputs than before. The manufacturer is already accepting orders, and it will deliver this redesigned SUV at $49,080 for the GX trim model.

The new images are available, and the 2021 Toyota Fortuner looks fresh. Typical for a mid-cycle facelift, the Fortuner styling changes and it gains more attractive lines. This time redesign includes LED headlights and taillights along with modified bumpers at the front and rear. Also, Fortuner features an enlarged grille with a black horizontal mesh pattern.

From what we heard, the manufacturer will also introduce a special version only in Thailand. According to Toyota, this model will be called Legender, and it will get more standard equipment, split front grille, two-tone finish, and larger 20-inch alloy wheels.

Inside, Toyota uses almost identical styling as the Highlander. The cabin of 2021 Toyota Fortuner is stylish and spacious. As we mentioned, technology is better, and this model features plenty of standard equipment. However, mostly, the cabin is unchanged compared to the current model. The biggest plus is that the manufacture added a more extensive 8-inch infotainment system that supports Apple CarPlay and Android Auto. Comfort is also better and trough three rows of seats, Fortuner has enough room for seven passengers. Basically, there will be more optional amenities, and one can get for example leather-accented interior for $2500.

Under the bonnet, the new 2021 Toyota Fortuner features a reworked 2.8-liter turbo diesel engine. According to Toyota, the output is better than before. Basically, the new SUV delivers few horses more. It provides 150kW at 3400rpm and 500Nm at 1600-2800rpm. Converted, it`s around 202 horses. We also heard that the manufacturer will use the same proven six-speed automatic transmission, which is still sourced from Aisin. However, it will be recalibrated to give more frequent torque converter lock-up. The 2021 Fortuner’s towing capacity will be slightly better, and now this SUV can tow up to 12.235 lb.

The forthcoming 2021 Toyota Fortuner will come later this month with some significant updates. This SUV, according to Toyota, will start from $49,080 for the GX trim model. However, going up to mid-range GXL price will jump to $54,350. Crusade is the top ranging model, and it cost $61,410. All prices above are without destination charges.