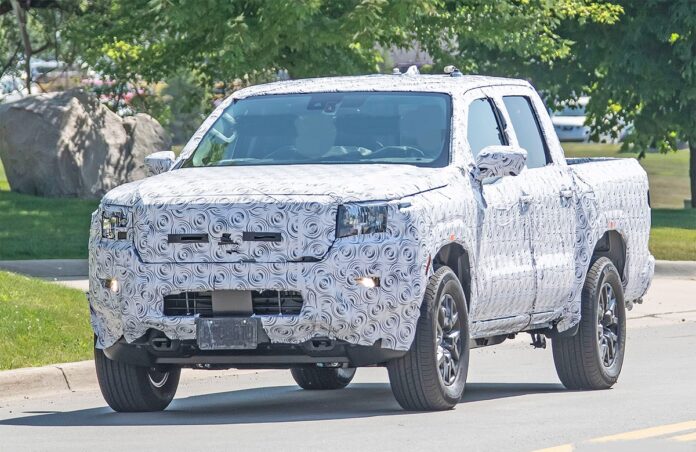 The first spy photos of the upcoming 2021 Nissan Frontier just emerged online. From what we saw, the latest pickup truck will definitively stick to the current model recipe with famous body-on-frame architecture.

The new spy photos also reveal some of the exterior design changes, and we heard that there would be a lot of novelty inside. Also, like before, Frontier should continue to be available in various cab and bed options. Moreover, a prototype that is caught testing is a crew cab version with what appears to be an extended bed. Under the hood, Frontier will use a proven 3.8-litre V-6 delivering 310 horsepower and 281 pound-feet of torque.

As we already mentioned, the forthcoming 2021 Nissan Frontier prototype model has been caught testing wearing heavy camo. At first glance, the body of a new pickup is almost similar to the recently updated Titan. Generally, the Frontier looks bigger and bluff, which is what buyers of this class tend to like.

Some small openings on the front reveal that the next generation will come with a wider grille and the same shaped LED headlights. Interestingly, looking at this pickup truck on the side, we noticed the same 17-inch wheels, like on the current one. However, on the back, some strange changes are happening. Besides the same shaped LED taillights, the rear windshield of the new Frontier has a sliding opening.

In terms of cabin design, the new 2021 Nissan Frontier will mostly remain unchanged compared to the current model. Some small refreshments are visible thanks to the new spy shots. The interior reveals the same layout and a large infotainment screen never seen on this model. Interestingly, the new infotainment sits at the top of the centre stack.

The new 2021 Nissan Frontier will only use a sole powertrain at launch. According to various news, this model will use a 3.8-litre V-6 delivering output of 310 horsepower and 281 pound-feet of torque. This engine should use the same 9-speed automatic also found in the Titan pickup. Besides, buyers will have the opportunity to choose of rear- or four-wheel-drive system.

The forthcoming 2021 Nissan Frontier was spied testing recently, and at first look, it provides the same design as the recently revealed Titan. However, with further analyze, we managed to see some updates beneath the skin. Nissan has also promised that the new Frontier will offer much higher levels of comfort than any competitors in the same class.

The Frontier was expected to be launch sometime later this year, but due to the global health crisis, first deliveries could begun in February of 2021. The price will definitively rise, and it will pass the current model that starts at $27,885.