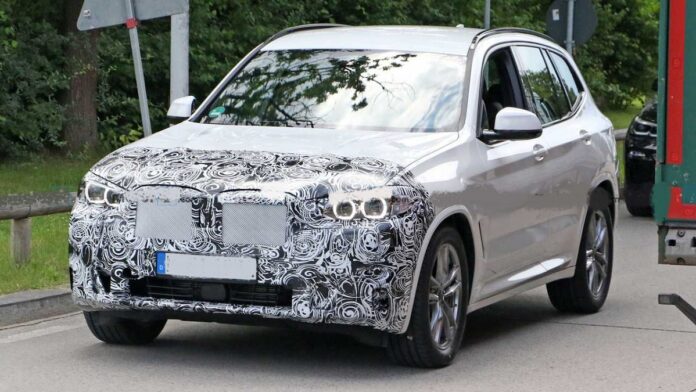 The upcoming 2021 BMW X3 has been spied testing and is carrying camouflage. Despite the disguise, we managed to see some of the changes. The third-generation model was released three years ago, and we are glad that this small crossover is spotted finally facelifted.

From the latest news, the new SUV will deploy plenty of upgrades. The highlight this time is definitively a new plug-in hybrid version. Also, the manufacturer already stated that it is working on a purely electric model called iX3, that will be ready for 2022 debut.

The latest 2021 BMW X3 has been caught testing and is carrying heavy camouflage. Basically, only parts that are hidden are on the front and rear. It seems that BMW will introduce mid-cycle revisions giving this SUV a more appealing look.

At first glance, the manufacturer used sharper lines and restyled bumpers. The front fascia is mostly covered and is not yet clear what is under the skin. We generally managed to see through the makeup that the forthcoming model is coming with updated headlights and taillights. From the BMW statement, this model will keep the same dimensions, and it will ride on the same platform.

Interior To Get Optional 10.25-Inch Display

Perhaps the most mysterious part of the 2021 BMW X3 is its interior. Right now, there are no available photos to confirm what is updated and changed. From plenty of speculations, the new model will get a refreshed cabin that will now host more quality materials. Also, we can expect even better seats and more standard features than before.

According to the KBB website, the new model will host a standard 8.8-inch touchscreen or optional 10.25-inch display. Most likely that all-digital instrument panel will be offered optional and it should replace the analog gauges with a fully configurable 12.3-inch screen. As you probably know, this is a similar system as Audi’s Virtual Cockpit.

The lineup of 2021 BMW X3 engines consists of four powertrains. The entry-level models sDrive30i and all-wheel-drive xDrive30i comes with a 2.0-liter turbocharged 4-cylinder that delivers 248 horsepower and 258 lb-ft of torque. This engine is reliable and is fuel-efficient. From the latest ratings, this unit has an EPA city/highway fuel economy of 25/29 mpg for RWD and 23/29 mpg for the AWD model.

The first-ever plug-in xDrive30e uses a turbocharged 2.0-liter and battery-fed electric motor producing a total of 288 horsepower and 310 lb-ft of torque. From BMW statements, this model can run from 0-60 mph in 5.9 seconds. Besides, it`s very efficient, with 60 miles per gallon equivalent (MPGe). Interest, xDrive30e can travel up to 18 miles on electricity alone. In Hybrid mode, it goes up to 68 mph and up to 84 mph in Electric mode. On a level 2 charger, the forthcoming plug-in model can be recharged in approximately 3 hours. All engines above will use the same 8-speed automatic transmission.

The upcoming 2021 BMW X3, except great styling, offers a vast range of engines. This model is also available for the first time as a plug-in hybrid that is really efficient. The new BMW X3 has a Manufacturer’s Suggested Retail Price (MSRP) of $43,000. However, adding an all-wheel-drive price will jump by $2,000 more.