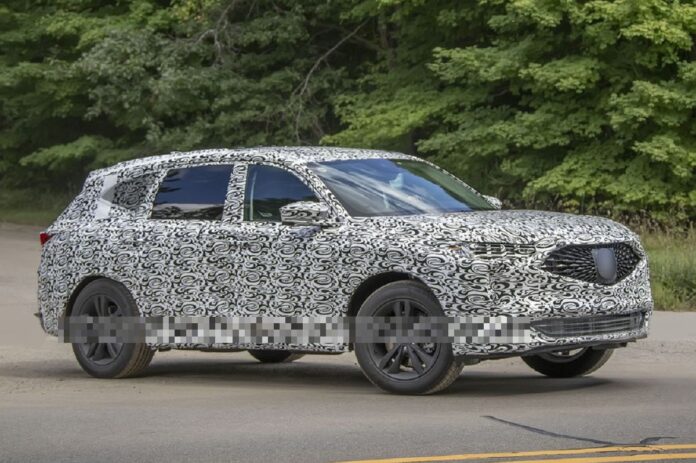 The redesigned three-row luxury SUV 2021 Acura MDX is spied testing and is wearing a new styling. The same design language has also been seen on the recently introduced RDX crossover and TLX sedan.

Moreover, styling is attractive, and this popular crossover will get a more chiseled look that can go in line with the other SUVs models in the same segment. Under the hood, the forthcoming SUV will be available with the same 3.5-liter V6 engine delivering 290 horsepower and 267 lb-ft of torque. Acura MDX Type S should be introduced at the same time as a regular one, and it deploys a hybrid system.

The spy photos of the newest 2021 Acura MDX reveals almost the same styling that we saw on RDX and TLX models. Generally, this mid-size SUV looks somewhat more massive than the current model.

With further investigations, we realize that the 2021 Acura MDX has similarly shaped headlights, as mentioned models. Also, the latest model wears famous Acura’s grille design with a huge “A” logo in the center and angular LED taillights behind.

As we mentioned, the forthcoming 2021 Acura MDX looks somewhat more significant than the current model. Thanks to that, it should get more interior space. Like every generation before, the same layout is present, and MDX comes with three rows of seats. Thanks to that, it has enough room for seven occupants. The truly premium vibe is there, and behind the third row is a decent-size cargo area. From what we heard, the interior of the next-gen Acura MDX will be more upscale, and the manufacturer will take a step forward in terms of materials and techs.

If you didn’t know, the current model comes with the AcuraWatch suite of safety and semi-autonomous driving features. Also, it comes standard with leather interior, power-operated and heated front seats, tri-zone automatic climate control, power tailgate, and a power moonroof. The MDX, besides all that comes standard with Android Auto, Apple CarPlay, and Siri Eyes Free integration.

It isn’t clear yet what the new Acura MDX will use of powertrains. The base option will be most likely to remain the same. This model is using a 3.5-liter V6 powertrain that delivers 290 horsepower and 267 lb-ft of torque. For the MDX Type S, power is likely to come from a proven 3.0-liter V6 powertrain and two electric motors, one for each rear wheel.

Power will be sent through a 7-speed dual-clutch automatic transmission, also seen on the NSX supercar. Thanks to these combinations, the TLX Type S will be able to make 355-horsepower. Like before, the front-wheel-drive (FWD) MDX can tow a maximum of 3,500 pounds, while with all-wheel-drive (AWD) 5,000 pounds.

The current generation MDX is built at the East Liberty Plant in Ohio, and we think that production may continue for the new generation. The forthcoming 2021 Acura MDX will start at $45,395, while all-wheel drive costs an additional $2,000. These prices are almost in line with models such as Infiniti QX60 and Volvo XC90. Moreover, the MDX Sport Hybrid undercuts hybrid versions of Mercedes’ GLE and Volvo’s XC90, and it starts at $50,000.